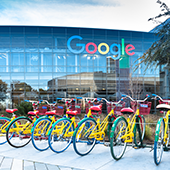 The first Pixel smartphone from Google was released in 2013. It was a high-performance phone with a lot of useful features for the average business user. On October 9, 2018, Google released the third version of its flagship device and it’s better than ever.

The Pixel 3 comes in two models, each with two price points depending on how much storage you need. The smaller device has a 5.5-inch screen with a slightly higher resolution, 2160x1080, than standard HDTVs. It’s $799 for 64GB of internal storage and $899 for 128GB.

If you or your employees use Google’s AI assistant to schedule meetings, send emails, or set reminders, the Pixel delivers a few features you won’t find anywhere else. For one, you can squeeze the side of the phone a bit harder than usual to summon the voice assistant.

Pixel 3s also come bundled with Google’s Buds headphones, which make it easier to interact with Assistant without looking at the screen. Your notifications, reminders, and emails can be read to you as they come in and voice commands let you respond to text and email messages. The voice assistant can even answer spam phone calls on your behalf, showing a live audio transcription on your screen in case you decide to take the call.

Having the latest version of Android installed on your phone is extremely important. It keeps you safe from malware designed for mobile devices and vulnerabilities in wireless networks, such as KRACK.

If your smartphone is manufactured by a company other than Google, you have to wait for that company to release a modified version of Android for that device. Even big-name manufacturers like Samsung take months to release these updates. With the Pixel 3, the latest version of Android -- along with all its feature and security updates -- is always available to you on day one.

Google’s flagship phone is IP68 water and dust resistant, which is great if you or your employees work in harsh environments. Pixel 3s also support wireless charging so you never have to plug in your phone again. Just set it down on a charging mat to juice it up.

Could you get through an entire day of work without your smartphone? Probably not. The Pixel 3 is an excellent option for staying productive anywhere you need to be, especially if you’re already using the Google Assistant. If you have any questions about optimizing Android devices for your work environment, give us a call today.