iPhone XS: Its pros and cons 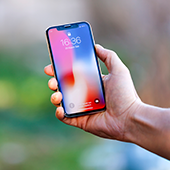 Nearly a year after releasing the iPhone X, Apple announced that it’ll discontinue it. Instead, they released the iPhone XS and XS Max. How do Apple’s latest smartphones stack up to their previous releases? Let’s look closely at the pros and cons of the iPhone XS.

Like most Apple smartphones, the iPhone XS is expensive, especially when compared to other smartphones. Yet its improvements aren’t as big a leap from the iPhone X that came before it.

On the inside
The main differences between the iPhone XS and its predecessor lie on the inside. With every release, Apple claims faster speeds and better performance upgrades. And this latest is no exception.

#1 A12 Bionic chipset
This is one of the most powerful chipsets of any smartphone, providing snappier responses to simple tasks like web browsing or sending messages. But the power of this faster chip is best felt when running apps and games using augmented reality (AR). AR apps still have a way to go in improving its visual polish, but the A12 chip is ready for their future.

#2 Face ID
Apple’s Face ID technology may not be as fast at unlocking your phone as a passcode or fingerprint scan, but Apple claims the facial recognition features are faster and more accurate than ever before. And it’s incredibly secure.

#3 iOS12
Using the latest iOS with the iPhone XS is a smooth and enjoyable user experience. The new iOS also has several nifty new features, including:

On the outside
Outside, the iPhone XS is almost identical to the iPhone X. However, Apple did make a few tweaks to its design and performance.

#1 Tougher glass case
Apple has upgraded its protective glass case, making it harder and tougher against accidental drops. It is also more waterproof, so you never need to worry about spills or getting caught in a storm.

#2 Improved screen
While the resolution (2436 x 1125) and pixel density (458 pixels per inch) on the XS are similar to its predecessor, there more colors thanks to the improvement of the dynamic range of its display.

#3 Improved camera
It has the same dual 12MP sensor as the iPhone X. But pixel size has been increased for better low-light photos. The Smart HDR (high dynamic range) mode also improves the details and brightness of your photos.

#4 Improved battery
Compared to the batteries in other smartphones on the market, the iPhone’s battery life has often been considered a little below average. But compared to the other iPhone batteries, the XS and XS Max are far better.

The verdict
Thanks to hardware improvements, the iPhone XS is still Apple’s most powerful phone to date, with faster speeds and improved cameras. Its battery life is so-so, it doesn’t sport a new design, and it’s still quite expensive. If you need help safely integrating Apple devices in your team's daily operations, contact our team today.