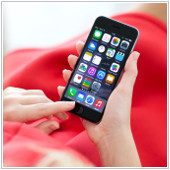 iOS 10 may still be in its beta stage, but Apple loyalists have grown accustomed to a level of hype in the months leading up to a new product release. Despite the announcements and presentations wrapping up last month, we’re just now getting wind of the unbiased opinions from developers who have courageously installed the upcoming version of iOS -- and the news is good. Here are six of the most exciting new updates to Apple’s seminal mobile operating system.

Changes to any mobile operating system (OS) almost always include updates to the lockscreen. However, this is no ordinary update. For the first time since the iPhone’s release in 2007, there’s no ‘Slide to Unlock’ feature. Instead, the screen provides in-depth, 3D touch-activated notifications displaying more detail than before without having to unlock your phone. The iPhone will automatically display the lock screen any time you pick it up, and you can unlock it by pressing the ‘Home’ button.

Another upgrade visible on the lockscreen and homescreen is the long-awaited addition of ‘widgets.’ These are basically compartmentalized apps that run on a portion of your screen without having to open the app entirely. With iOS still in beta, the list of available widgets is already quite long, but iTunes controls, weather and calendar are a few of the standout native widgets. Don’t worry though, Apple is allowing third party widgets from the likes of ESPN, Google Maps and Amazon. They can be accessed by swiping from left to right on your lock screen or page one of your home screen.

The iPhone 6s has been out long enough that most people have had a chance to interact with its 3D Touch feature, which performs different actions based on how much force you apply when tapping the screen. When combining 3D Touch functionality with the ‘Control Center’ dock that appears with a flick of the finger from the bottom of the screen upwards, each function displays ‘Favorite’ actions. For example, if you use a slightly more forceful touch on the Camera shortcut, you’re presented with the options to jump straight to Traditional, Slow Motion, Video or Selfie recording.

We see a lot more of 3D Touch throughout iOS 10, and another place it’s quite evident is notifications. Whether it’s on the lock screen or the notification center, a strong 3D Touch will open a small window that allows you to interact with that app without opening it completely. This is especially helpful for replying to messages and emails. In addition to this-- something that may seem small to some, but huge to others, is the ability to hide all your notifications with just two taps. Simply press hard on the ‘X’ button in the upper right, and then click ‘Clear All Notifications.’

The iPhone’s native Messages app got a thorough overhaul, but we’ll leave the discovery of emojis, invisible ink and ‘fireworks’ for another time. Those don’t have much place in the business world, but handwritten messages certainly do. Give your professional messages a more personal, attentive touch by writing responses with your fingers with the app’s Digital Touch option.

Unfortunately, you can’t get back valuable storage space by deleting unnecessary native apps. But you can finally remove them from your home screen. Don’t have an iWatch and don’t see why you need to have the app on your phone, albeit tucked away in a folder on page three? Press and hold on the app, tap the shaking X, and tap ‘Remove.’ All gone.
iOS 10 is one of the most significant updates the iPhone has ever received. It’s still another month away from widespread release, but if you’d like to install the beta now, or you just want to learn more about how to automatically convert text to emojis, we’re your guys. Open up your boring, old Messages, and drop us a line. We’ll have you sending handwritten messages in no time.